I start my new SciFi ebook, A Face on Cydonia, as follows:

On the Cydonian region of Mars there are two faces staring into space. Both are two and a half kilometers long, a kilometer wide and about four hundred meters high, and since both are in exactly the same place, no observer can see more than one of them. Most see a battered butte with craters roughly in the right place such that, with considerable imagination, the image of a badly torn face can perhaps be seen. Some, however, see a refinement of the enhancement produced from the original low resolution Viking photographs, a truly alien monument, a deep message to humanity . . .

I refer, of course, to the “Face”, which has gained a certain degree of notoriety as people speculated as to what might have created what we see.  Guesses run from Martians, aliens, to natural erosion. Most people would be skeptical and point out that, “You can see faces anywhere, such as clouds,” and dismiss anything other than nature as nonsense. While this face is somewhat different from cloud faces, it has one interesting thing in common: much of the face is hidden in the original image, simply because the angle of the sun shades half of it. One purpose in my novels is to try to show that reality should follow the rules of logic. So, what would logic say? The first question a scientist asks is, are the data suitable to resolve anything? If they were collected for some other purpose, they may not be. The initial data were collected by the Viking orbiter, which had the task of creating the first map of Mars. The map, perforce, had to deal with the major features, so for various reasons it settled on resolution that would give the desired map. Below, see one of the images of the Cydonia Mensae, in which the Face was first seen. Note that the angle of the sunlight shades quite a bit of the Face. 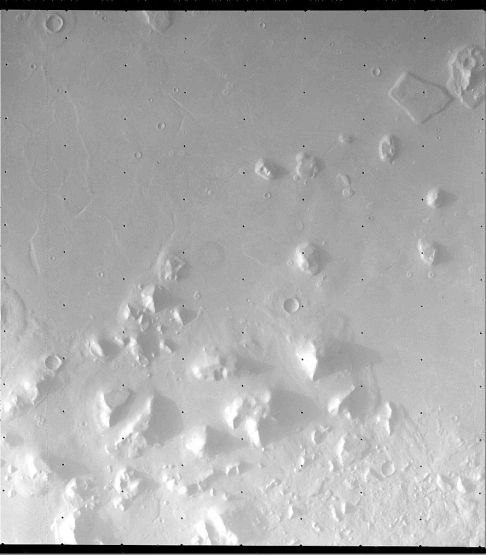 We can expand and enhance the particular region (small black dots are lost pixels and are not real):

The initial argument against erosion/adventitious craters was initially, the probability of sufficient coincidences is too low. That argument is false, because what was overlooked was that with so few pixels devoted to the face, coupled with the shading, you do not need much in the way of accidental coincidence. That does not prove it is natural, but rather suggests you need better data before reaching a conclusion.

As I noted in Red Gold, we can immediately eliminate Martians, because the face looks like ours  (if it looks like a face) rather than like a possible Martian’s, and leaving aside the inhospitality of Mars, even had there been such Martians, they would have no idea what our face would look like. There are further reasons: there is no reason why a Martian would carve a face only we could see, and Mars could never have evolved indigenous technological life forms without leaving some evidence of the process. Aliens are slightly more difficult to eliminate by logic. As one of the characters in Red Gold said as a joke, space-traveling aliens who visited Earth, say two million years ago, could have worked out what our faces would look like when we evolved sufficiently to develop the technology to see such a butte on Mars, and they could have carved something. It could then be a message to us, meaning, “Come to space; it is possible and it is worth it.” That still leaves the issue of why would they bother to do that.

All of this speculation almost certainly annoyed NASA considerably. Beside the Face, some thought they saw pyramids. That is not hard to understand, except again the specific lighting in the first picture greatly enhances the possibility, since only a pointed top and an edge is required. Accordingly, when Global Surveyor was sent to Mars, NASA promised to use its better resolution to settle for once and for all what this rock was. Meanwhile, I had thought that all the activity might make it worth while to write  a SCiFi novel about the rock. Of course you cannot simply write about a rock, so I had to construct a story around it. This was slower than I thought, and Global Surveyor settled this issue, one of its images being reproduced below:

The end of speculation about aliens! Well, not necessarily in fiction! (Actually, not necessarily in reality, as can be seen if you check the web!) I started my novel A Face on Cydonia with a television program that showed the image of the butte, intending to show how silly people were to think there could have been aliens, when the image morphed into the Viking-type image and winked. Eventually, this lead to an expedition, in which the members all have problems with each of the other members, and the book focuses on these problems. To add to the mix, there are at least three attempts from an external agent to murder at least one of them. Then, to keep the story going, each of the participants finds exactly what they did not want to find, and I set up a situation for more story by having each of them look forward to a future where they will have to carry out what they do not wish to do.